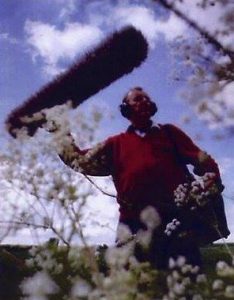 Hello, I’m Ken Jackson and to celebrate the start of our 50th audio production – after rather an inactive period – can I welcome you to Sounds Natural and our lists of CD birdsong and other countryside titles.   For these I have used the experience of my BBC World Service – and other BBC outlets, especially Radio Oxford – from 1965-1995 to record and produce our library of compact discs.  We can provide you with some mellow analogue nature-themed productions covering a variety of birdsong and other wildlife, literature, art and countryside topics.

Everyone can enjoy the CD’s natural sounds either on their own, or in the company of a variety of wildlife experts to identify them in a diverse range of habitats – gardens, woodlands, moorlands, forests and seaside. Among the productions are also countryside poetry titles, a twin CD dramatisation of ‘The Wind in the Willows’, The Water of Life – an Anthology of Whisky, At Home with Calmac, two Scottish art productions and a series set around Burford in the Cotswolds. The majority of the wildlife CD’s are recorded in Scotland and England, but Wales and Kenya also feature, with Ireland hopefully waiting to be added.

If you are looking for help with bird song identification, or wanting to listen to birds and other natural sounds on their own, then we would be pleased to help you find what CD, or CDs you may need amongst our recordings.

For details about our titles and their contents   click here.

Our titles fit into four groups of CD productions.

Many of the recordings were made out and about with experts to identify what species are singing or calling.  Indeed 17 titles are birdsong identification productions, among which is a trilogy of bird identification CDs with long bands of 50 species covered and a minimum of identifying commentary – Beginning Birdsong, Continuing Birdsong and Confusing Pairs of Birdsong.  Apart from those, the audio CD bird identification library contains eight Scottish titles at the present – A Night Out with the Birds on the Ythan estuary, Ayrshire Woodland Birds, Ayrshire Shore Birds, Ayrshire and Galloway Upland Forest Birds, A Wild Goose Chase in Galloway, Ayrshire & Galloway Moorland Birds, Ayrshire and Galloway Bird Table Talk, and The Galloway Kite Trail – an audio guide.   Then there are six recorded elsewhere – Birds of a Winter Estuary, Minsmere’s Summer Birds, Sounds of Kenya, Birdsong at Dawn, Birdsong of Welsh Oak Woodland and Marsh, and A Wildfowl Walkabout.

The general countryside productions are all connected with nature and the heritage of the countryside.  Among these are a dramatisation on two CDs of The Wind in the Willows, The Water of Life – an anthology of whisky, Bee a Particular Otter, three poetry CDs – The Nature of Poetry, Wordsworth reads Wordsworth and A Selection from The Lyrical Ballads, also four productions involving the area around Burford in the Cotswolds, and At Home with Calmac – Arran and beyond and back.

We also have two DVDs – Highland Harmonies and The Woodman and the Wild, with other slide-tape audio visual productions.  Apart from our CD’s, we have an extensive history of on-site heritage audio tours, including 33 for the Royal Yacht Britannia in 29 languages.